Head on over to discover.twitter.com and check out some 1st tweets for yourself!

RACINE, Wisconsin — Rep. Paul Ryan (R-WI) has been one of the primary architects of the GOP’s ongoing crusade to repeal and replace Obamacare. Most recently, the Budget Chairman has indicated that Republicans will attempt to pass individual reforms to roll back the health law’s provisions piece by piece.

But not all of Ryan’s constituents agree with his position. On Wednesday, the Republican congressman was confronted by one such voter at a town hall in southeast Wisconsin.

“ACA subsidies are a good thing,” Michael Martincic, 64, of Oak Creek told Ryan, criticizing his Party’s repeated attempts to get rid of the health reform law.

Martincic works as a roofer and is currently paying $700 for his health insurance through his union. However, upon browsing Healthcare.gov — “it was so easy to get on the site; the whole thing only took 15 minutes,” Martincic told ThinkProgress afterward — he found that he qualified for subsidies and could be paying as little as $200 for coverage.

Martincic also told Ryan about others who had been helped by Obamacare as well, including a friend with leukemia whose out-of-pocket expenses had been cut in half. At several points, the crowd clapped and cheered for him.

Nonetheless, Ryan defended his party’s repeal votes — 51 in total — noting that some of them only aimed to chip away at particular parts of Obamacare. “We didn’t have 51 votes to repeal it altogether 51 times,” Ryan said. “That’s sort of this urban legend…there are many pieces of this law that we went after.”

Ryan’s own plan to replace Obamacare, the Patients’ Choice Act, was unveiled back in 2009. Although that plan lacks some of the consumer protections in Obamacare, it also incorporates some of the same provisions that made it into the health law. Ryan admitted last year that Obamacare does include some ideas that Republicans “have always been talking about.” But that hasn’t stopped him from repeatedly introducing budget proposals to repeal the law.

Martincic said he and his wife are still deciding whether to go through with the insurance switch, but he’s grateful to have the option. When ThinkProgress asked him whether he thinks Ryan sees the people like himself, who could benefit from Obamacare, Martincic shook his head. “He misses it.”

MARTINCIC: What Obama did was get this law passed. Whether it’s good, bad, or not, it got passed. It’s actually helping some people grow, helped this other guy [with] medication. The Republicans….By myself…I could actually…get some kind of subsidy, which would help me…

RYAN: With the ACA, one thing I want to say is we didn’t have 51 votes to repeal it altogether 51 times. I think that’s sort of like this urban legend that we said, ‘let’s repeal it.’ It’s like we did a repeal vote on the whole law. There are many pieces of this law that we’ve gone after—several of them that were made into law, so please know—I think even Democrats would acknowledge that there are a lot of problems with this law. And so we passed a lot of things changing this law—several of which were made into law—but I really do believe there’s a better way to do it than with this health care law. 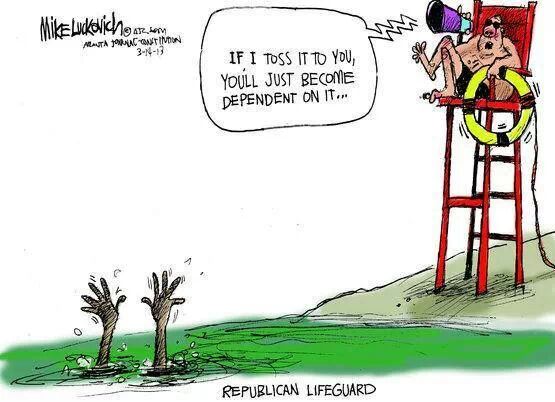 Every once in a while I take a sigh and think, “Thank God Romney and Ryan are not in the White House.” Yesterday was one of those days. Paul Ryan (R-LaLaLand) spoke at the Conservative Political Action Conference (CPAC) yesterday and claimed that Democrats are out of touch. He went on to tell an obviously fictional tale of a poor kid who resents receiving free school lunch because it means his parents don’t love him.

1) If Obama’s “weakness” is what led Russia to send troops into Ukraine – what do you call Bush, considering we experienced the worst terrorist attack in our history, we had thirteen embassy attacks during his 8 years and in 2008 Russia sent troops into Georgia?

3) If a gubernatorial candidate campaigns with someone who’s a self-admitted sexual predator; draft dodger; wrote a song called Jailbait professing his sexual desires for a thirteen-year-old; and has made veiled threats on the president’s life, shouldn’t that be enough to deter you from voting for that candidate?

4) If more guns make us safer, and we have more guns than any other nation on the planet, why do we lead the world in gun violence?

5) If Republicans are “listening” to the American people then why aren’t universal background checks required on all gun purchases; isn’t immigration reform passed; was the government shut down; and gay marriage still illegal?  Considering every stance the Republican party makes on these issues is in complete contrast to what the vast majority of Americans support.

6) If our deficits have drastically dropped in the last five years, how exactly has Obama drastically increased spending?

7) Millions of gay people had sex today, how did it impact your life?

8) If the rich are richer than ever before, and taxes are still at some of their lowest levels in years, how exactly is it Obama’s fault that wages are stagnant?

9) If being homosexual is a choice, and you weren’t born heterosexual, can you recall the moment you chose to be straight?

10) If countless hours of scientific study, research and data done by some of the brightest minds in the world doesn’t “prove anything,” why do you think a book that you can’t produce an original copy of does?

Wouldn’t this be wonderful!!!